America is 20 trillion dollars in debt and running a trillion dollar yearly deficit. Leading economists are warning us the Dollar is destined to collapse within a few years. "So what," you say?

If the Dollar is allowed to collapse, it will be the end of free money for dependents. That means 50 million Americans will no longer get a check for food. The riots and looting will destroy every storefront over a weekend. It will be the end of civilization as we know it. Martial Law, death camps and starvation and disease will be the future we leave our children.

The wholesale application of Gravity Theory would resolve America's social and financial problems and save our civilization. However, those in charge of government will not apply Humanology® for two reasons.

(1) Democrats and Republicans are “Independent Operators.”

The Democratic Party and Republican Party are monopolies and not true political parties. We say this with certainty because they operate without a concrete plan of action to which all members agree.

Note: A true political party puts forth a concrete platform (a detailed plan of action) on which all party members stand and are obligated to support. By standing on their party platform, candidates do not need to run individual campaigns and, therefore, don't need to raise big money. Besides making lobbyists obsolete, voters know what they are going to get, and things are sure to get done.

Instead, Democratic and Republican representatives are free to act independent of party promises made. In short, members of Congress do not have a plan and they do not perform as a team. This is why the political process is so noisy and expensive, and why Congress never gets anything done.

Note: Imagine a football team with players that didn't work together. How successful could we expect it to be? Can you imagine the infighting? Sound familiar?

(2) Democrats and Republicans are in the pockets of others.

Being “independent operators” forces Democrats and Republicans to campaign on their own individual ideas. The consequences are the need for big money to pay all the related expenses including travel, accommodations, advertisement, and an entourage of staff and managers. Needing big money forces candidates to accommodate special interest groups in trade for financial support.

If we are to save the Dollar and preserve our civilization, we must act now, band together and clean house. Specifically, we must elect a party with a plan and stop voting for individuals with their empty promises and self-serving agendas.

A simple concrete platform is in place. All we have to do is unite the various Patriot Groups across America and implement the plan.

A SuperPac has been formed to serve as a funding source for independent Patriot Groups around the country. It's purpose is to unite them by forming a common platform on which they can stand united and resolute. Click on the image below to visit the “Patriot Revolution PAC” website. 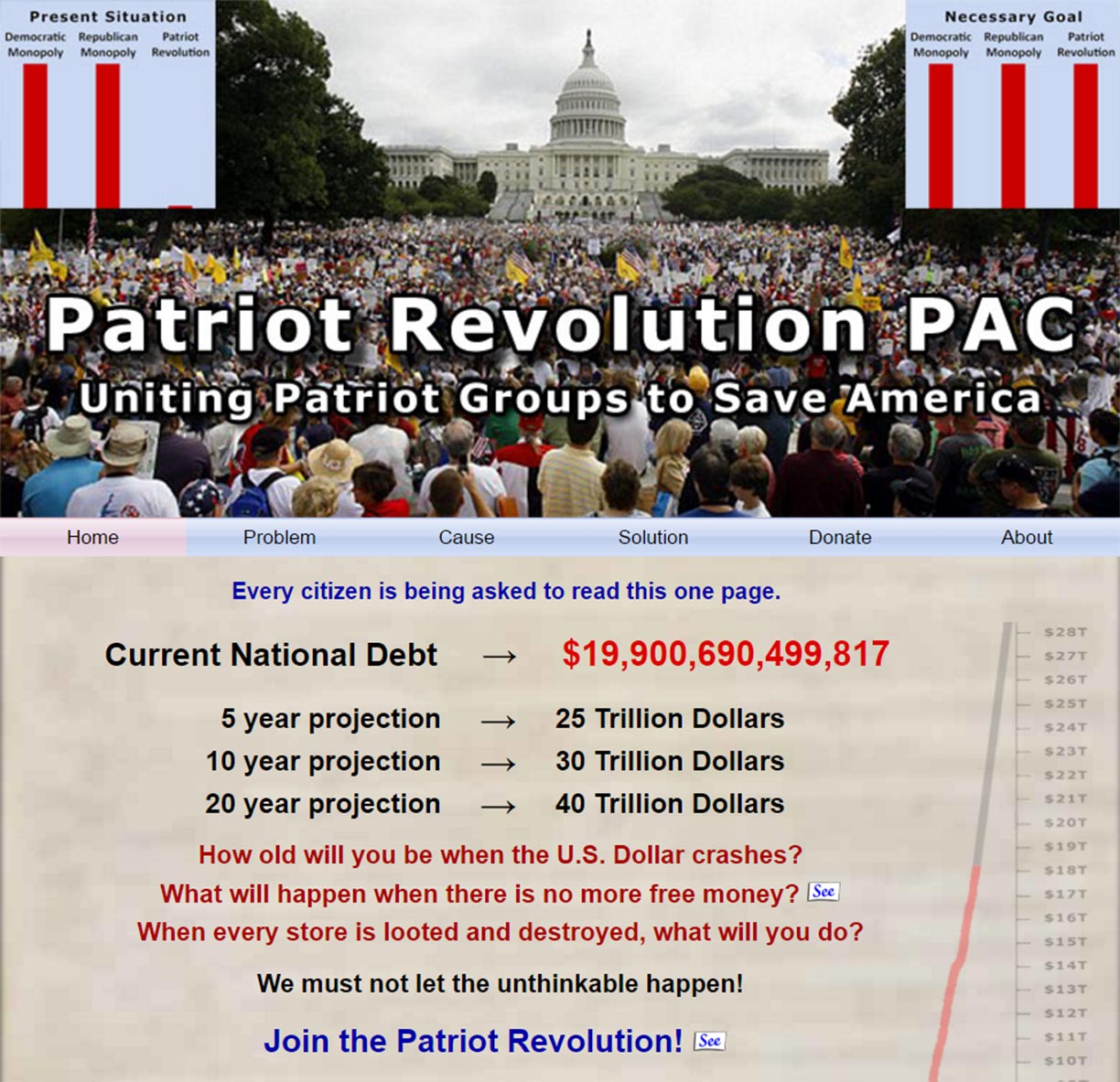 These independent Patriot Groups need funding. You can help us help them with a donation of any kind. You can donate by going directly to the “Patriot Revolution PAC” website (click on the image above). However, if you contact us, we will offer some form of professional consideration as a bonus for your support.

Convey your intentions in the “Comments” section,
and we will get back to you shortly.

The Patriot Party® is an emerging political party that endorses the application of Gravity Theory and the Bidirectional System as the way to resolve America's social, financial and political problems.

Spring-Gravity Theory® is a marketing group that applies the teachings of Humanology® in crafting marketing plans and advertising campaigns for the largest companies and nation-states worldwide.

That breakthrough is featured on the Humanology® website. More and more organizations are adopting the knowledge offered by Humanology®.

It's Not About Love is a musical written for high school and college students. It reveals the secret to success in romance and fulfillment in marriage. It's message is based on the knowledge and discoveries of Humanology®.

Idea Songs is a group of songwriters that applies Humanology® in crafting songs, with an eye on making the most impact and maximizing audience appeal.

Professional Songwriter Group is an association of lyricists and composers that study human nature and incorporate that knowledge into their musical works, making their products more impacting on the listening public.

Back On Top Music is a publisher of music that works only with authors who understand and incorporate what we now know about human nature.

Magyar Music is a music act that incorporates Humanology® when crafting its songs.

More and more organizations are adopting the knowledge offered by Humanology®. The author of Humanology®, Don Magyar, can be contacted directly by going to his website.

His books are individually titled and can stand alone, yet they are part of the Humanology® series, published by Permanent Publications.

Ten Things on which Patriots Agree

(Note: The plan is simple, succinct and straightforward.)

“These are not planks of a platform. They are directives in a plan of action.”

On these 12 Directives Patriots stand!

Ten Things on which Patriots Agree

(Note: The plan is simple, succinct and straightforward.)

“These are not planks of a platform. They are directives in a plan of action.”

On these 12 Directives Patriots stand!